Foods that fill you up

One reason is that some foods are digested rapidly and some
foods take much longer to digest.  Some
foods seem to fill you up and leave you feeling satiated.  What is satiated?  The book
I use to teach nutrition, defines “satiety” as “the feeling of fullness and
satisfaction that occurs after a meal and during eating.  Satiation determines how much food is
consumed during a meal.”

My daughter sent me an article on the Satiety Index that rates
different foods as to how full they make you feel after a meal.    Susanna
Holt, PhD from Australia, developed this index as a way to determine how foods satisfy
your hunger.  She had people eat 240
calories worth of 38 different foods and then every 15 minutes had them report
how hungry they felt after eating the different foods.

Can you guess what food ranks the highest in satiety?  I am not surprised as it is one of my favorite
foods – potatoes.  “Of all the foods
tested, potatoes were the most satisfying”.
We often serve baked potatoes at meals and almost every time either my
husband or I comment on how filling potatoes are.

Some findings were quite interesting.  We learn in nutrition class that fat has lots
of calories and one would think that would fill you up.  But fat is a weakling when it comes to
satiation.  You eat a meal high in fat
and one would think it would make you feel full, but just the opposite, you may
not feel full and overeat as a result.
Holt found that boiled potatoes (low in fat) have a high satiety index,
3 times that of white bread.  But French fries
– which are high in fat, have a lower satiety index.  Probably the opposite of what one would
expect.  So, eat boiled potatoes and you
will feel fuller than eating some high fat French fries.

We also learn in class that foods high in fiber fill you
up.  High fiber foods stay in your
stomach longer, resulting in a feeling of fullness.  Protein foods are another food that stays
with you longer, also creating a feeling of fullness.  The nutrition book
recommends drinking some real milk at meals as real milk has protein that will
help you feel full and satiated.  The satiety
index confirms both principles as Holt notes, “Roughly speaking, the
more fiber, protein and water a food contains, the longer it will satisfy.”

Here are some of other findings:

Holt gives some meal advice to dieters or those who
are health conscious:

This week when you are planning snacks or meals, think about
the “satiety index” and be sure your meals or snacks have some high-quality
protein such as real milk, cheese, yogurt, lean meat, or tuna.  And add in some foods with fiber – fresh fruit,
fresh vegetables, and whole grain bread, whole grain cereal or whole grain crackers.

Interesting that sometimes only small changes are needed to
eat healthier.  Students in my class are required
to keep 24-hour diet recalls listing all food and beverages eaten in a 24-hour
period.  One student had some Ritz
crackers for a snack.  Changing those
Ritz crackers to Ritz
Whole Wheat crackers and adding some cheese would have made for a higher “satiety
index” snack and a healthier snack.  Another
student drank some fruit punch for a snack and thought this was a serving of
fruit.  In actuality, the fruit punch
contained no fruit or fruit juice at all.
If that student had a snack of an apple and some yogurt, they would have
a healthier snack and one with a higher “satiety index”.

How can you raise your “satiety index” this week and eat meals and snacks that fill you up and keep you feeling full longer? 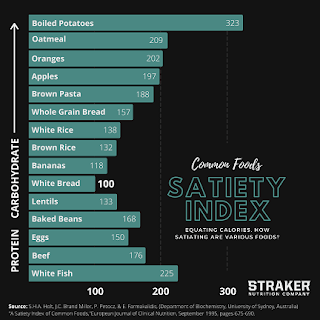