Inflammation: the good, the bad and the ugly – Thinking Nutrition 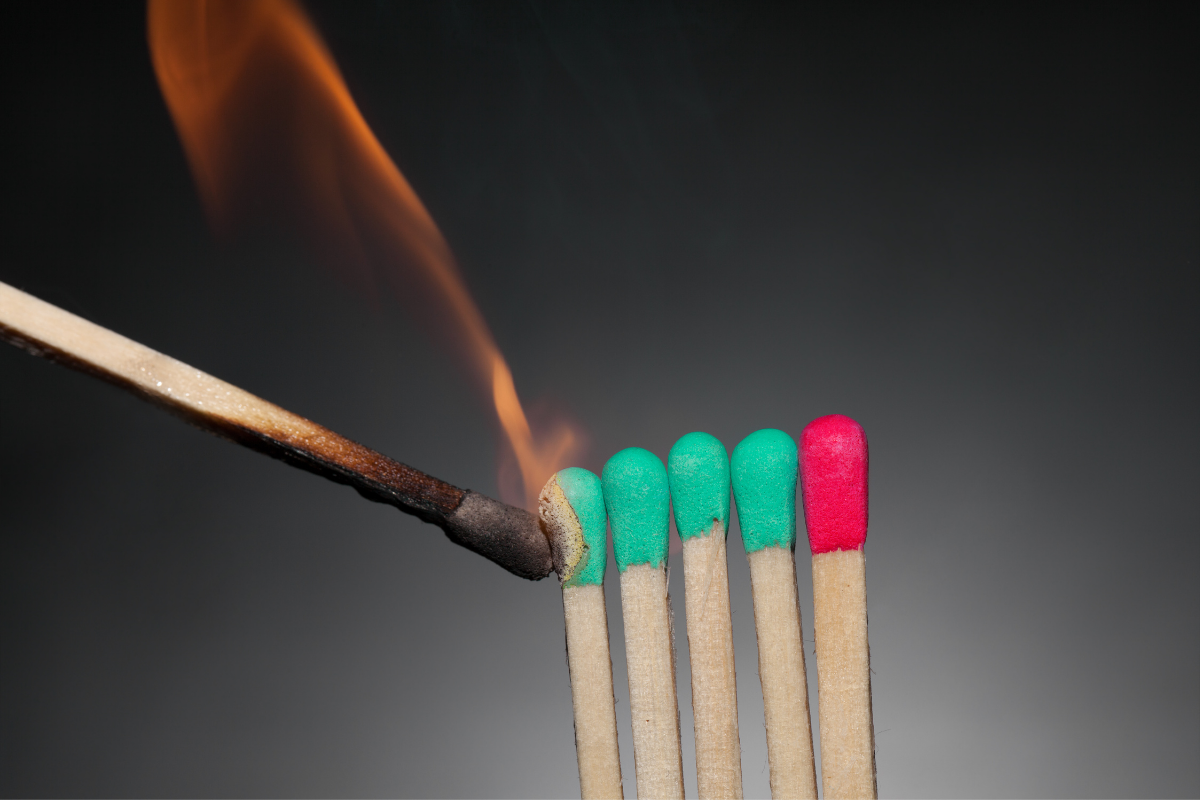 Far from something scary, inflammation is a natural process that helps your body heal and defend itself from harm. It is only when inflammation becomes chronic that the story changes. In this blog post, I’ll explain just what exactly inflammation is. I’ll then go on to explain what causes it, when it is good and when it is bad, and importantly: what role diet and lifestyle habits play in inflammation.

Let’s start off by defining what exactly inflammation is. Inflammation is the body’s normal response to protect against infection, injury or disease. It involves several components of our immune system. Going from the activation of white blood cells, right through to the release of chemical inflammatory signalling molecules.

Inflammation gets a pretty poor showing in the ‘health and wellness’ world. And while some of the negative press is justified, you should be thankful that your body is able to go into an inflammatory state.

So, every time your cut or burn yourself, graze your knee or sprain your ankle, the pain, redness and swelling you see and feel is all part of your body’s inflammatory response that starts off the healing process. You would also know that this type of inflammation dampens down after a short time to allow the long-term recovery and healing process to take over.

Chronic inflammation is the bad guy

The evil cousin of acute inflammation is chronic inflammation. That’s when inflammation sticks around at a low level for a long time – having detrimental effects on our health. Think of it as friendly fire from your immune system reacting to something that it perceives as a threat.

And here is a key point: unlike acute inflammation which shows up as redness, swelling and pain that you can see and feel, chronic inflammation can be invisible. It is hard to detect chronic inflammation, so we have proxy measures for it. One such measure is a blood test for an inflammatory marker called C-reactive protein or CRP for short.

Chronic inflammation also increases platelet activation and blood clotting. It can also deplete the reserve of internal antioxidants, generate free radicals and amplify oxidative stress. And it will even delay wound healing and tissue regeneration, and promote cell ageing and premature cell death.

It is not too much of a stretch to say that many chronic illnesses such as heart disease, type 2 diabetes and even some forms of cancer have chronic inflammation at their core. You’ll also come across it in conditions like inflammatory bowel disease and even depression.

So, the million-dollar question: what causes inflammation? It’s a long list. Viruses, autoimmune diseases like rheumatoid arthritis, smoking and pollution, and pathogens that the body can’t effectively repel can all cause it. Ageing is also linked to inflammation. So too is obesity, in particular, central adiposity which has more macrophages localised in fat and thus produces more inflammatory mediators.

And fun fact: poor sleep habits can promote chronic inflammation. Especially that seen with shift work which can disrupt our circadian rhythm and even alter the gut microbiota.

And to stay on theme for this website, which is all about nutrition, a pretty poor typical Western diet high in highly processed convenience foods and added sugar and low in minimally processed plant foods has also been implicated in inflammation.

How lifestyle changes can treat inflammation

That’s the bad news out of the way. Now for the good news. Diet and lifestyle choices can go a long way to treating inflammation. And for diet, what is widely considered an ‘anti-inflammatory diet’ is one high in fruits, vegetables, healthy fats, legumes, and wholegrains. A Mediterranean-style diet would be one such variation of this theme, especially when you add in fish and olive oil.

But it doesn’t stop there. Exercise is also a potent force against chronic inflammation with a negative association between physical activity levels and CRP. Weight loss is also effective in lowering inflammation. Losing weight means reducing the ‘inflammatory factories’ being the fat cells and their associated macrophages.

Quitting smoking is a clear win if you want less inflammatory stress in your body. And then we have dietary fibre which inversely associated with CRP levels.

And that last point on fibre is a big one. Fibre is primo fuel for our gut microbiome which is a big player in chronic inflammation, especially when you consider our gut is the home to most of our immune activity.

In fact, a recent meta-analysis published only in 2020 looked at the effects of probiotics on inflammatory markers. And the finding? Probiotics could significantly reduce blood measures of inflammation including CRP and a bunch of cytokines linked to promoting the inflammatory response including TNF-α and several interleukins. Interleukins are a group of naturally occurring proteins that facilitate communication between cells. Interleukins are particularly important in stimulating immune responses, such as inflammation.

Because of the connection between the gut microbiome and inflammation, fibre is one of the best ‘anti-inflammatory foods’ you can consume. Fibre helps shape the bacterial community into a healthier, more inflammation-protective one. Fibre is nourishment for gut bacteria and you will find it in an array of everyday foods. Fruits, vegetables, wholegrains, legumes – so many to choose from. The simplest advice is to eat a wide variety of nutritious whole foods from a variety of plant foods, which would naturally contain different types of fibre.

Special mention here of probably one of the most vilified ‘inflammatory foods’ I’ve come across. And that’s poor old dairy. Is dairy really an inflammatory food that should be on the ‘avoid’ list for everyone? I’ve always wondered how over my decades in medical nutrition research, my subscription to dozens of leading medical and nutrition journals, and keeping up with almost all areas of nutrition research, that I’ve somehow missed this link?

And I don’t mean an isolated study or two that shows that dairy causes inflammation. You can put a case forward for any food or nutrient causing or preventing any disease you want. You just have to dig deep enough into the literature and the cherry pick research that supports your view (like when I did a parody post on how toxic broccoli is). I mean a consistent narrative of demonstrating inflammation seen across animal, observational and intervention studies and which outweighs studies that don’t show it or the opposite.

Where the truth lies about the dairy and inflammation story is the opposite of what the Internet proclaims. And this was the topic of a systematic review of the clinical evidence from 52 trials looking at dairy consumption and inflammation.

And the result? Dairy had a significant anti-inflammatory action. Which is bang on what I would expect considering the range of bioactive compounds in dairy that are considered to have an anti-inflammatory role. Especially when you broaden it to fermented dairy foods with their probiotic bacteria. And no, the study was not funded by the dairy industry.

It is only in people with dairy allergies (and intolerances are not allergies) that you see inflammation. And that should be surprising to no one. Peanuts, shellfish, eggs and so the list goes on are all ‘inflammatory’ if you have an allergy – that’s what an allergic reaction is after all. Yet just because some people have allergic reactions to peanuts, eggs or shellfish, we don’t label them as ‘inflammatory’ foods that the whole population needs to avoid.

If you don’t like dairy foods, have ethical issues with it, or even have some tolerance issues with it then don’t eat or drink it – simple. There are lots of other delicious foods in the world to eat. But don’t cut it out from your diet just because of popularist woo pushed by ‘wellness’ influencers telling you that dairy is inflammatory.

And to extend this, you’ll come across lots of advice online about eating or avoiding certain foods because of their pro- or anti-inflammatory effects. But the science is nowhere yet solid enough to really blame or hero any food as being a key inflammatory or anti-inflammatory agent. Sure, plenty of foods have been found to reduce inflammation such as turmeric, blueberries, ginger, tea, various vegetables, dark chocolate and fish – but most of the research is from laboratory experiments as opposed to in people.

What it all means

Where the research around diet and inflammation reliably points is to dietary patterns or themes that are linked to more or less inflammation. Such as a typical Western diet dominated by ultra-processed foods being in column A and a Mediterranean-style diet in column B.

But all diets exist in countless variations. So, it’s not that you shouldn’t believe that certain foods may be beneficial or not when it comes to inflammation. But that it is better to focus on a whole diet and lifestyle approach rather than just ‘hacking’ your way into it by gulping down turmeric lattes and thinking ‘job done’.